For my first review I had to go back to the first beer that I had that I thought was a proper beer (and still is). Before trying coopers I was like much of my friends and other young Aussies downing chemi brews from one of the big two breweries-hate to say it but Melbourne Bitter was my drink of choice back then...
I had my first Coopers sparkling ale on my 18th birthday (the legal age in Australia to buy alcohol) but it wasn't me who bought it ... one of my mates said "try this ..it's good!"  Had a swing and maaaaate it was good--at the time it was totally different to what I had been used to and changed my idea of beer forever.... 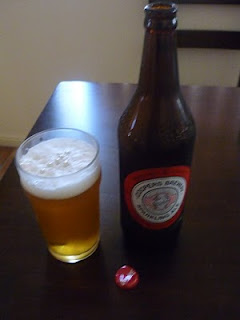 Coopers sparkling ale at 5.8% ABV it packs a punch! No preservatives or additives are added either making it qualify in my book as PROPER BEER!  It's no hop monster but it is a well balanced, cloudy, perfectly carbonated ,slightly bitter with a bit of citrus coming through too, Making it a great beer for any occasion.  Also without any silly chemicals in it the hangover will be less severe if you are keen on downing a fair few the night before. Above all it is a great option at the bottle-o in the usual sea of macro's.

Coopers as whole also gets my respect as it has grown from an old school craft brewery into the largest (still) family owned brewery in Australia--Even after several attempts by big macro breweries to take it over the Coopers family kept staunch and the company grew as a result.

Coopers Sparkling is pretty much available everywhere in Australia and I have seen it throughout Malaysia,Thailand at high-end supermarkets such as Isetan and and also in Japan at my fave bottle-o: Tanakaya in Mejiro Tokyo .

DG
Port Stephens, Australia
I am on a mission to spread the good word of proper beer! And hopefully brew some myself!!